This is going to be one of Susan’s most difficult podcasts to produce. It’s about the death by suicide of her son David. It’s one thing to discuss moving forward after experiencing the death of her son and then her husband Michael. It’s totally another to discuss losing a child.

August 18th is the FIFTH anniversary of her son’s death. Talking about David is Susan’s way of keeping him close and very much a part of her life.

He was a good son, smart, charismatic, kind and loving.  David was 4 weeks from his wedding.

Susan’s words will probably resonate with all of us on many levels. Life is hard, but Susan’s mission is to make it the best possible one for herself and those in her orbit. 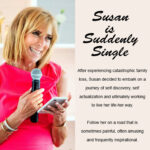